This past week's #52Ancestors prompt is "Favorite Photo". This is not an easy decision for anyone, let alone a genealogist who treasures each photograph. A long standing tradition for the last few years is receiving a group of photos and family letters from my aunt for my birthday and Christmas. One of my favorite photos is this one of my grandfather, Michael Doherty, during his service in the U.S. army. 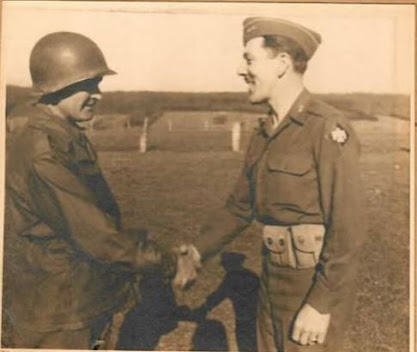 It has been hung on the basement wall of my parents' former home for over 18 years. Over the last few years I have been digging into more of my grandfather's service during World War II. I even hired a researcher to go to the National Archives in St. Louis, Missouri to request and scan his military personnel record. Sadly his record was destroyed in the 1973 fire like many of the other Army and Air Force records. There wasn't even a "B file" that remained.  His final payment voucher was kept in a separate location.

This resulted in having to turn to morning reports to fill in the gaps on where he was overseas in Europe. Morning reports detailed where a particular organization was stationed. Think of it like a muster roll. They also note any particular events such as hospitalization, deaths, prisoners taken, etc. 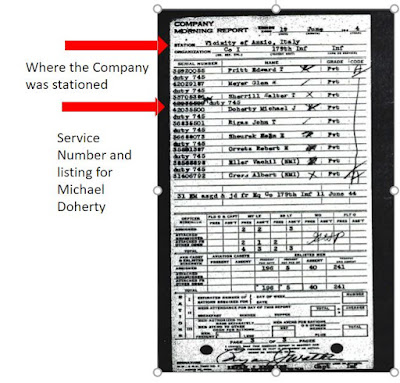 Morning Report when my grandfather was in Italy

The patch on his uniform is from the 45th Infantry Division. The division was known as the "Thunderbirds". I was fortunate to find an active group on the Thunderbirds on Facebook that helped me find more about my grandfather. One particular discovery was a scan of the general order for Michael being awarded the Silver Star (which I previously blogged about). His unit liberated Dachau on April 29, 1945.

General Order for Michael J Doherty (from the National Archives) 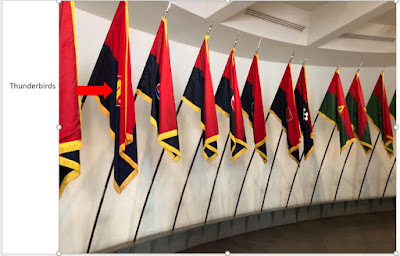 Flags of liberating divisions at the United States Holocaust Museum in Washington, D.C. 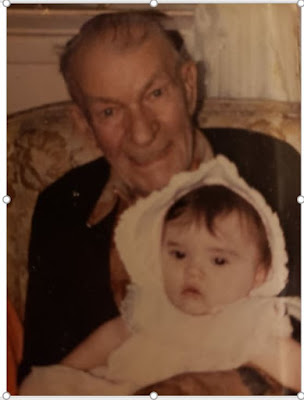 My grandfather is my hero. As I shared at my RootsTech lecture last year "Reporting for Duty", I wondered what he felt holding his granddaughter who was half Irish and half Jewish. This is one of my last photos with my paternal grandfather. He died on September 12, 1986, just after my second birthday. He will always remain my hero and I keep him with me everyday.

at February 01, 2021
Email ThisBlogThis!Share to TwitterShare to FacebookShare to Pinterest
Labels: 52Ancestors, Military