“Let us save what remains: not by vaults and locks which fence them from the public eye and use in consigning them to the waste of time, but by such a multiplication of copies, as shall place them beyond the reach of accident.”

This quote is from Thomas Jefferson in a letter to Ebenezer Hazard in 1791, where Thomas Jefferson returned two manuscript volumes about the history of the colonies. Thomas Jefferson was concerned about the original copies held in public offices and how war has impacted these papers in addition to time and accident. This holds true today across the globe where historical papers are destroyed via fire, flooding, and even war.

Across the United states (particularly in the south) we hear about courthouses burning down and records lost. The most famous example is the 1890 census. Most people think the fire that broke out in the Commerce building in Washington, DC destroyed the documents. Yes, there was a fire that broke out but it was the water damage that the firefighters flooded the basement with that destroyed the records. The archivists walked into ankle deep water - it was a nightmare.

In 1922, the Public Records Office in Ireland was destroyed during the Irish Civil War, taking with it such treasures as original wills dating back to the 16th century, parish registers which recorded baptisms, marriages, and deaths and census records from 1821-1851. There are pictures online you can see of the documents strewn on the street after the explosion, a horrible sight to see when you think of your relatives’ documents lying on the street.

What can we do about it? I’ll discuss 3 examples.

One project involves digitization. This involves the use of specialized cameras that will photograph documents. You can go to places like the National Archives in Washington, DC where they have computer labs set up that will allow you to digitize documents that are being held in their archives. I have had several genealogy friends transcribe Civil War pension records they pulled for their research. Now these documents are online for free for anyone to view. Once the documents are digitized, they can now be indexed.


What is indexing? This involves a web site or software program where volunteers review historical documents and transcribe the text. This transcribed text can then be loaded into databases and can be searched. As a genealogist this enables me to do specific research on a family member. FamilySearch, one of the leading genealogy companies, has a web based indexing program where you can select from hundreds of projects and start indexing, all from the comforts of home. Your contributions are then sent to another volunteer to arbitrate or review what you have transcribed and make any corrections (basically a second pair of eyes) before it’s sent on as the final version of that record. When the collection or a large portion of the collection is indexed, the database is published on FamilySearch for use by the public.


As we approach Independence Day next week, I ask all of you to think of ways that you can help preserve history. Join an indexing project, research newspapers for History Unfolded, digitize your family documents. Be a citizen archivist and do something to preserve our past!


at June 28, 2017 No comments:
Email ThisBlogThis!Share to TwitterShare to FacebookShare to Pinterest

I've been trying to attend more genealogy conferences as of late. I recently attended the New England Regional Genealogical Consortium (NERGC) in SpringField, MA and RootsTech in Salt Lake City, UT.  I started giving out business cards with my blog information to help get my name out there as well as include details on my family on the back for "cousin bait". 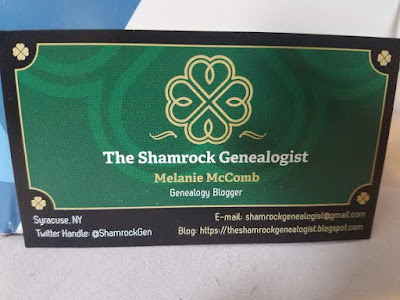 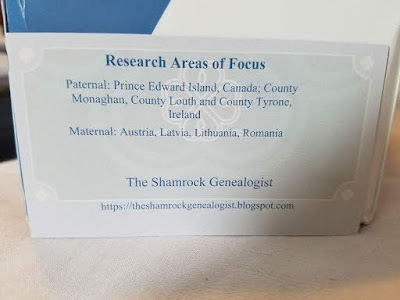 The comment I hear the most when I give out my cards is "Oh shamrock. You do Irish genealogy". It is true that I embrace my Irish roots, which is my father's line.  I've had the most genealogy success going back to Ireland so the shamrock seemed like a good symbol to use.

The shamrock is typically associated with St Patrick to explain the Holy Trinity. It didn't become popular until the 19th century where the shamrock and Celtic harp were used as national symbols. During the Victorian Age it was viewed as an act of rebellion to participate in the "wearin o' the green".

I've never been to Ireland but I view it as another home to explore. So many of my ancestors lived in Ireland and established themselves as local farmers for generations before the Irish famine occurred and then migrated off to Prince Edward Island or to the U.S. for a new life.

The shamrock is also associated with good luck, even though it's not officially a four leaf clover (which we associate with leprechauns). In an Irish bride's bouquet you may find a sprig of shamrock to bring good luck to the couple. In genealogy there are times that we do get lucky - we find a document that should have been lost, the family bible turns up from a long lost cousin who got in touch, a DNA match that helps you break down a brick wall on a family line. I've been fortunate to have had much luck exploring my family tree. May you have luck in your genealogy research!