He Was a Brave Boy

I enjoy researching the military veterans of the family. The records that you can find can tell you so much about their lives and give you a sense of what they encountered during times of peace as well at war. I've highlighted several military ancestors in my blog. I've recently been digging into my 2nd cousin 1x removed, Horace Joseph.

Horace died on 6 June 1944 in Normandy, France. He was a paratrooper and broke his leg upon impact. He bled out and died. According to his Find a Grave memorial, he tried to use a tourniquet. Apparently, Horace is included in a book, which I plan on getting a copy of at some point.
6/14 Update: Here's an excerpt from the book Enfin Libres that discusses Horace: "The other soldier did not wore no trace of bullet or stab, but a tourniquet he had made himself above the knee revealed the nature of the wound from which he had succumbed.  His parachute having presumably not working, or too late, he had fallen like a stone, hence its broken limb on landing. The, bone having punctured the flesh an abundant haemorrhage was resulted that the American had tried to stop by squeezing strongly, but to no avail, his thigh with his strip of bandage."
Up until today I only knew about his mother, Sura Siegel, but did not know his father's name. I learned his father was Henry Joseph. Horace's father was listed as his next of kin in addition to his wife, who I also knew nothing about. 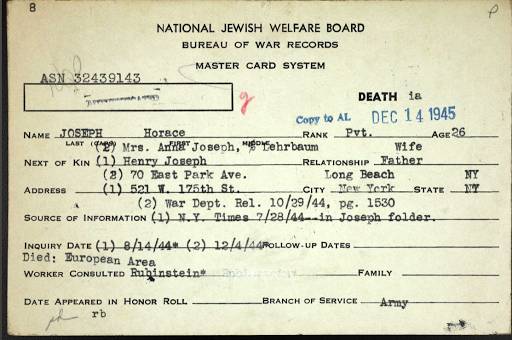 Source: Ancestry.com
I learned more information about his family through this interesting article. Horace's wife Anna was arrested for burglary along with another woman. According to the article, the War Department informed her parents, who then told their daughter about her husband's death. Horace's parents met with the police when they were discussing their daughter-in-law's case and were then informed. Here's an excerpt:
"They wept, but quickly composed themselves and spoke proudly of their boy. He enlisted soon after Pearl Harbor and gave up a non-commissioned officer's rating to become a paratrooper."
His father said that "He was a brave boy". He was indeed brave to enlist in the military to go overseas and jump out of a plane, sustaining an injury that ultimately led to his death.
Horace's body was brought back from France and buried in the Long Island National Cemetery in Farmingdale, New York. Rest in peace cousin. You are not forgotten.
at May 31, 2021 No comments:
Email ThisBlogThis!Share to TwitterShare to FacebookShare to Pinterest
Labels: Memorial Day, Military

It's been several months since I did my last post. I've had a number of lectures to write and client cases to work on. My personal genealogy research has been increasing slowly during my free time. I even made some breakthroughs in my tree including the following:

Here are some of my tips that I used to help accomplish the above:
What brickwalls have you busted recently? What are some of your favorite tips?
at May 17, 2021 2 comments:
Email ThisBlogThis!Share to TwitterShare to FacebookShare to Pinterest
Labels: Tips
Newer Posts Older Posts Home
Subscribe to: Posts (Atom)