I'm a day late on posting about my ancestors My Military Ancestor challenge hosted by Patricia Greber at My Genealogy Life.

Today I will highlight my paternal grandfather, Michael Joseph Doherty. Here is a picture of Michael that was on his Declaration of Intention paperwork: 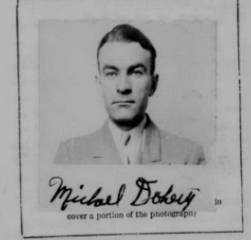 Let's start with a brief family history before I talk about his military service:

Michael was born on June 12, 1910 in Queens County, Prince Edward Island, Canada to Joseph Doherty and Rose Rooney. He was one of 6 children. He was the second oldest son. He came to the United States in September 1927 on the SS Calvin Austin to join his sister Catherine in Dedham, Massachusetts. He moved to NYC and was naturalized in 1939. He then married my grandmother, Rose Corcoran in 1941 at St Mary's Roman Catholic Church in Long Island City, Queens, NY.

He served in WWII from September 1 1943 until October 20, 1945. The story goes that he was originally going to be a cook for a general in the army but instead was handed a gun and went into the infantry. He served in the 7th Army, 45th "Thunderbird" Division of the U.S. Army. His rank on his tombstone is noted as Tec 4.

During his time in WWII, he was awarded the Silver Star award for his bravery. He was on the front in France when his group were pinned down under enemy fire by the Germans. My grandfather took out a Germany Jerry gun by shooting a rifle grenade at it and took out the gun. Also, during his service my grandfather liberated a concentration camp. I was told that he never spoke of what he saw when came back home.

If you would like pay your respects to my grandfather, here is his tombstone.

Rest in peace grandpa Michael.
at November 02, 2017
Email ThisBlogThis!Share to TwitterShare to FacebookShare to Pinterest