11/4: Update: I received information from a Corcoran cousin that confirms that I had some incorrect information on Bernard below. I have updated his biographical information below.

Bernard Joseph Corcoran was born on May 31, 1891 in the small town of Dillonstown, located in County Louth, Ireland. He was the 3rd oldest son of John Corcoran and Katherine Conlon. He had 6 siblings. He sailed from Liverpool, England heading toward the U.S. in 1911. He became a house painter. He lived in Long Island City, Queens from 1911 to 1920. He became a U.S. citizen in 1919. Most of these details came from his U.S. passport application. What caught my eye was his occupation was listed as "disabled war veteran".  In his physical description, Bernard was listed as being blind in both eyes.

I started completing some research on his military service and with the assistance of my friend David Lambert and my cousin Ciaran McDonnell, I found Bernard described in Father Duffy's diary "Duffy's War". One story discussed how Bernard accidentally killed one of his own men, Oscar Ammon in March 1918. Bernard was exonerated and not charged.

I completed some newspaper research and was able to confirm a family story about how Bernard was injured during WWI. Bernard enlisted in Company F, 165th Infantry. His rank was corporal. On July 28, 1918, he was blinded by a machine gun bullet at Chateau Thierry.  Following his injury he returned home to join his cousin and my great grandfather, Thomas James Corcoran, in Long Island City, Queens, NY.

There was a charity event held in 1919 in Bernard's honor to raise the funds to help send him back home to his parents in Dillonstown. I learned from my aunt that he never moved back to Ireland and lived out his days in the U.S., ultimately dying in Maryland.

He was reassigned to the Evergreen Hospital for the Blind where he stayed until he was discharged and moved to Cantonsville, Maryland in 1932. At Evergreen he received musical training from the government and even led an orchestra of blinded World War I veterans in 1924. I learned that he married twice, once to Mary Komenda (who died young) and then again to Ethel Murphy and had two children, Catherine and Margaret (who are both deceased). He is buried in New Cathedral Cemetery in Baltimore, MD. I submitted a request this afternoon for a photo of his headstone.

Here is a picture of Bernard from his U.S. passport application: 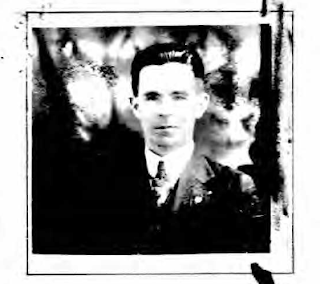 at November 03, 2017
Email ThisBlogThis!Share to TwitterShare to FacebookShare to Pinterest