Finding the Origin of a Name

This week's #52Ancestors challenge prompt is namesake. Discuss an ancestor you were named after or a name being passed down from someone else. My first name "Melanie" comes from my great grandmother, Matilda (Mollie) Siegel. My middle name "Elizabeth" comes from Matilda's husband Eddie (which was actually Anton before he changed his name).

I find myself looking at names in my family tree. There are often names being passed down from one generation to the next. Sometimes the children have the middle name from their mother's maiden name. This is a fun bonus to come across as it often holds the clue to finding out more about the mother's line.

A few months ago, I used traditional Irish naming patterns and DNA clustering to uncover the identity of my 4th great grandfather. I started with looking at the details on his son, Francis Dougherty. The marriage witnesses to the wedding of Francis and Catherine were a Patrick Keenan and Michael Doherty.

I had no clues to the identify of Patrick and there was no sign of Michael Dougherty coming to Prince Edward Island. In the 1861 Canada census, there was a clue. Francis was enumerated in Lot 58, PEI as "Frances O. Dochardy". Francis' first son was named Owen. Given that the oldest son is usually named for the father's father and that Francis may have had a middle name of "Owen", a search was conducted for an "Owen Dougherty" who came to Prince Edward Island from Ireland.

An obituary was found on islandnewspapers.ca (a wonderful newspaper web site for Prince Edward Island ancestry) in The Examiner newspaper on 22 Apr 1861. The article is found below: 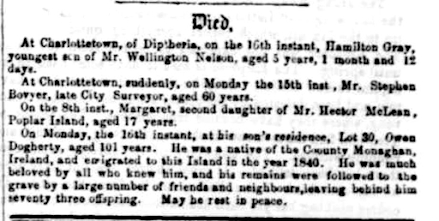 This Owen sounded promising. He came from the same county in Ireland and is old enough to be the father of Francis Dougherty. I next conducted a search to identify any children of Owen that may be possible siblings to Francis. Several candidates were identified in my DNA matches including a Patrick, Honora, and Catherine. I researched Patrick and found an obituary for him that said that his father was Owen. The article even confirmed that Owen lived to be 101 years old! This matched the Find a Grave memorial I found for Owen.

An excerpt from the article is below: 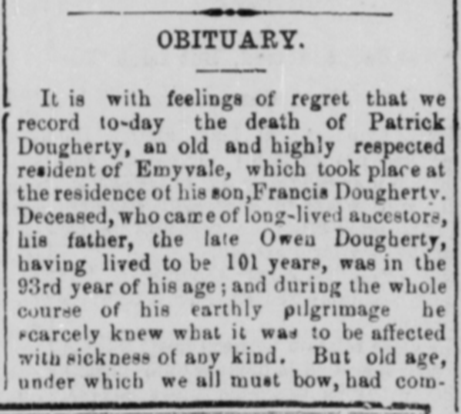 Excerpt from The Examiner - 9 Mar. 1899 (from islandnewspapers.ca)

I updated my tree with Owen as the father of Francis and added Patrick, Honora, and Catherine as children of Owen. I then patiently waited about 24-48 hours for my ThruLines to update. And then the results came in...

I had DNA matches with Patrick, Honora, and Catherine! This helped me confirm that I had the correct common ancestor, Owen Dougherty. I also know where the family name of Owen came from.

The name Owen has been passed down over several generations:

What are your some of the names you have in your tree that are passed down from generation to generation? Have you learned the origin of the earliest ancestor with that name?

at January 24, 2021
Email ThisBlogThis!Share to TwitterShare to FacebookShare to Pinterest
Labels: 52Ancestors, DNA